Any press is good press - a mantra that is heavily relied upon when it comes to outrage marketing (which you might know as ‘shock advertising’). Can you remember the last social post by a brand that made you angry? Or an advert that was so ridiculous and outrageous that you had to question its legitimacy? If the answer is yes, you were probably on the receiving end of an outrage marketing campaign. And the fact you remember it is proof that outrage marketing, or at least the psychology behind it, works.

Triggering a reactive response like anger, annoyance or distress makes a brand stand out and stick in peoples minds. Morally, it is questionable. There are issues surrounding the ethical side of using negative emotions to advertise, but shocking people to elicit a response can work very well.

If you want to find out:

Keep on reading, we'll tell you all you need to know.

According to Wikipedia, shock advertising “is a type of advertising that "deliberately, rather than inadvertently, startles and offends its audience by violating norms for social values and personal ideals".

Outrage marketing falls under this umbrella, but the term is used more in situations where a brand is trying to draw in the attention of like-minded people and purges a customer base of those who don’t agree with the brand’s language or humour and are likely to have grievances about it. Because you are deliberately aiming to annoy or offend, it can be extremely difficult to pull off without any casualties. The end goal is to develop a customer base that connects with your brand, understands your message, and are therefore more likely to support and defend it. The kind of customer base drummed up by outrage marketing is also more likely to stick around and interact with content. On another wavelength, outrage marketing can be utilised to draw attention to important political or social issues.

Either tactic has the power to bring a company to its knees if played out wrong. Cancel culture and the never-ending echo chamber of social media have no mercy when it comes to brands deliberately kicking up controversial opinions designed to shock and offend. These strategies are most successful when carried out online, but they can incorporate poster printing and offline methods to gain attention.

Keep in mind that most successful campaigns have a good cause behind their controversy – they don’t just do it for the sake of it.

Paddy Power are undeniably the masters of controversy. They have a history of annoying people with their ad campaigns, and even admit to it themselves:

“Over the years, we’ve got up to some things at Paddy Power which raise eyebrows around the dinner table at the in-laws. We’ve been chased by cops around the Vatican (2005), faked some deforestation of the Amazon (2014), and somehow helped Nicklas Bendtner score twice against Portugal, fuelled by PP Lucky Pants under his shorts (2012). Good times.”

The beauty of Paddy Power's approach is their transparency. They openly and frankly admit to having a controversial marketing strategy, so you'd think people would second guess their adverts - yet it works every single time. And when the World Cup comes about, they enter a race for attention alongside other betting, sports and alcohol brands. They undoubtedly won this race in 2018, but in true Paddy Power style, they upset many people in the process.

For their ‘England Til I Dye’ campaign, they released a video of someone spray-painting a red St. George’s cross on the back of a polar bear. Of course, everyone was furious.

After the stunt exploding online, they revealed that it was done with CGI and the polar bear wasn't harmed in any way. They also revealed their true motives for the campaign, which were to raise donations for Polar Bears International (obviously an ulterior motive was to drum up interest before the World Cup, but good on them for supporting a worthy cause).

Read more about the England ‘Til I Dye’ campaign here

Starting life as a small café attached to Charleville Lodge in Phibsborough, Dublin – The White Moose Café has gone from success to success and has become an unmatched example of outrage marketing done right.  You’ll see an example of it as soon as you click on the site.

Powered by owner Paul Stenson, The White Moose café has gained over 200,000 Facebook followers and almost 100,000 Instagram followers – which is way more of a following than a standard café could ever hope to have.

So how did this happen? Controversy has always been king in drumming up trade for The White Moose – from harsh, but truthful, call-outs of influencers expecting freebies, to barring vegans and breastfeeding (but not really), they have only continued to grow with each social post. People now visit from all over the world. Paul even does talks about the power of outrage marketing – and the café is living proof that he really knows his stuff.

Although controversy won a large proportion of their audience, The White Moose also has a very strong staff-first ethos, regularly contributes to charity, and does its part to help out other small businesses by promoting them to their huge following.

Check out The White Moose Facebook here. It is updated semi-regularly so stick around for live examples.

In the 90’s, the clothing company Benetton released a series of adverts that touched on hard-hitting, delicate social and political issues which needed attention bringing to them. By that time they were very well known for promoting equality and diversity through their campaigns, but the 90’s ‘United Colors of Benetton’ campaign took up a much darker tone than what their customers were used to.

Among the most controversial photographs used is a photo of a man with AIDS on his deathbed (not the only Benetton advert run to increase awareness of HIV and AIDS), the victim of a Mafia murder and a nun and a priest sharing a kiss.

Although these images are much less likely to raise eyebrows now, the ads were visually shocking and extremely daring at the time – attracting a lot of backlash, calls to boycott the brand and censorship. None of the ads contained any of Benetton’s clothing lines.

“I have found out that advertising is the richest and most powerful medium existing today, so I feel responsible to do more than to say, ‘Our sweater is pretty.”

In modern times, Benetton is still a renowned clothing brand.

Can this be considered shock marketing? Despite the light subject matter, it did genuinely shock people so we'd say it qualifies. One fateful day for seemingly no reason, the relatively inoffensive cereal brand Weetabix Tweeted this monstrosity. 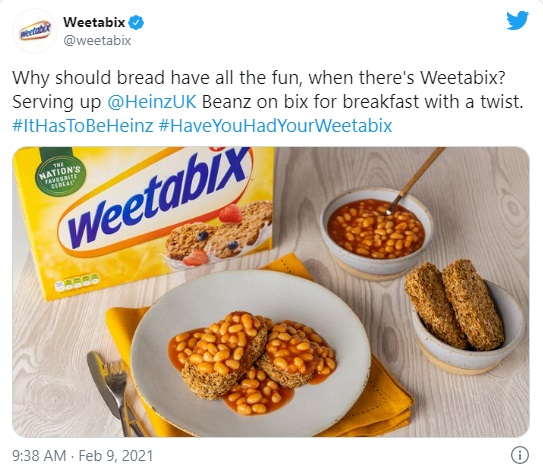 Understandably, the whole internet went into a state of deep shock and blew the post up, making the brand's outrage marketing attempt a complete success.

Other brands got involved which started some fun conversations. Even Innocent's genius marketing team jumped on the Twitter thread.

This is just one brilliant example of how outrage marketing can be used in a fun and harmless way. Weetabix is already a well-known brand, but they got themselves (and Heinz, who we’d assume were in on the joke) a ridiculous amount of free press coverage and social shares.