The Biggest Lies In Advertising History 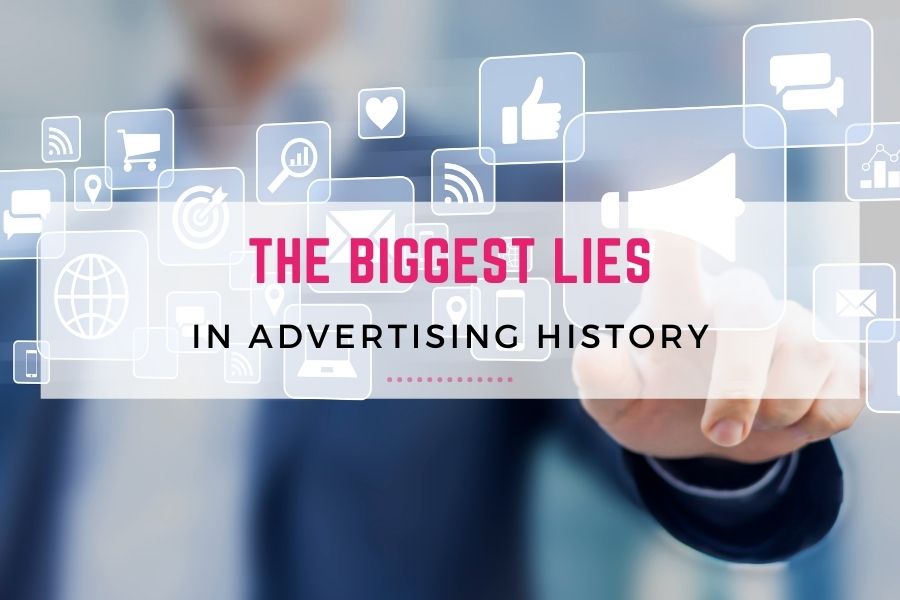 The Biggest Lies In Advertising History

It's widely known that you shouldn't take ads too seriously, yet still, we hear about companies taking advantage of consumers through their advertising. The average person sees around 6,000 to 10,000 adverts every single day[i], and these ads have a bigger effect on your subconscious than you may think. Although you may not be acknowledging the source, that advert is still being taken in and influencing your responses to the product. With this in mind, false advertising can be incredibly harmful – a marketing lie could make you believe anything about a brand and convince you that their product will improve your life. Although there are laws around what advertisers are and aren't allowed to say, some brands have gone a few steps too far and based their adverts on downright lies.

From products that can cure all diseases to free round-trip tickets to America, here are some of the biggest lies in advertising history.

Before we go in to the deceitful untruths of some adverts, though, let's have a look at the laws behind advertising. There are certain requirements for all advertising and marketing that must be abided by in the U.K. According to the government website, all marketing promotions must be:

These are the basic obligations for all advertising, although there are further requirements for certain sectors. All advertisements must also stick to the Consumer Protection from Unfair Trading Regulations. This means that advertisers cannot mislead or harass consumers. For example, a company cannot include false or deceptive messages, leave out vital information or use aggressive techniques to sell their product. Now you know the laws on marketing to consumers, let's take a look at some of the biggest false advertising scandals from around the world. Stemming from the early 20th century to the late 2000s, these blatant fibs are pretty unbelievable.

That Dr Koch's Cure All Medicine Could Cure All Diseases

In 1940's America, Dr. William Frederick Koch claimed that he had invented a drug that could 'cure-all human ills', which he called glyoxylide. From tuberculosis to cancer to STD's, multiple desperate people bought in. Over 3,000 health practitioners around the U.S stocked the treatment and charged patients anything up to $300 for a single dose. Rightfully suspicious, government chemists tested the drug, only to find that Koch's so-called glyoxylide was, in fact, distilled water. The doctor fled to Rio de Janeiro not long after so was never prosecuted, but the drug was classified as a fraud by the FDA (Food and Drug Administration). That Vitamins Could Prevent Cancer American pharmaceutical company Bayer advertised that their vitamins could prevent prostate cancer in men due to an ingredient called Selenium in 2009. However, although Selenium is very effective in fighting stress and boosting the immune system, there's no definite proof even today that the mineral will completely prevent prostate cancer. Bayer were sued due to the radio and television ads that made these claims and had to pay £3.3 million to Illinois, California, and Oregon, where their vitamins had been highly stocked.

That You Could Get Two Free Tickets To America

In 1992, vacuum company Hoover promised British people two free return flights to the U.S if they spent at least £100 on any Hoover product. Expecting people to pay the money but give up on the deliberately long and convoluted process of getting their tickets to America, Hoover were quickly overwhelmed with millions of pounds worth of ticket expectations. The consumer response was immense, and Hoover received around 300,000 applicants for their tickets. Many of their customers sued the company, and lawsuits continued to be dealt with until 1998. On top of this, many Hoover executives lost their jobs as a consequence.

That You Could Lose Weight Without Exercising or Dieting

Baseball player Steve Garvey was brought in by Enforma Natural Products, Inc. to advertise two diet supplements, called the Enforma System. Taken together, the company claimed that their 'Fat Trapper and 'Exercise In A Bottle' would stop the absorption of fat and make a person lose weight without dieting or exercising. The company were quickly pulled up on their lies and forced to pay $10 million for consumer rectification, and law suits continued to pop up concerning the case for five years afterwards. The Federal Trade Commission tried to sue Steve Garvey in federal courts several times for his involvement in the ad, but the courts ruled that endorsers weren't liable for misleading statements in adverts. This led to the FTC making it illegal for celebrities to make false statements in advertising.

That Face Cream Would Alter Your Face

Multiple brands, including L'Oreal, Lancome and Olay, have been involved in similar situations where they photoshopped images of their models to make their skin look smoother, then suggested that their face cream would give the customer the same results. All ads with similar issues were banned for being 'misleading', most notably L'Oreal's, which was complained about several times by Liberal Democrat MP Jo Swinson. However, the Advertising Standards Authority ruled that post-production was okay as long as "the resulting effect was not one which misleadingly exaggerated the effect that the product was capable of achieving" and judged that, since the images had been altered to completely change the complexion of the models, they exaggerated the results of the products and defied this rule.

That An Electric Shock Could Cure Cancer and AIDs

Dr Hulda Clark claimed that all human disease was due to parasitic infections, and that electric shocks could kill these parasites. To advertise her electrical devices - 'zappers' - she claimed that, since all diseases were the result of parasites, they could heal all diseases, including cancer and AIDs. The FTA and the Food and Drug Administration deemed her claims unfounded and fraudulent, so the adverts were pulled; however, because the police failed to provide Dr Clark with a speedy trial, she could not be charged.

That Shoes Could Make You Lose Weight

Shoe company Skechers marketed their Shape-up shoes with the help of celebrities and the claim that simply tying their shoes would make you lose weight. The FTC quickly took action against Skechers, who had to pay a $40 million settlement, and had to give a refund to any customer who bought their shoes back. Similarly, Reebok claimed that its Easy Tone range would automatically make people lose weight, and their case was settled for $25 million with the added cost of a refund for everyone who bought the product.

That Cereal Could Improve Children's Immunity

Well-known cereal brand Kellog alleged that their Rice Krispies would help support a child's immunity due to 25% of the daily recommended antioxidants, vitamins and nutrients being contained in the cereal. They advertised this falsity prominently on the front of their boxes, and the FTC ordered Kellog to remove the unproven claims otherwise they would be taken to court. Kellog removed the claim from their boxes with a statement adamantly assuring that science proves these antioxidants help support a child's immune system.

That Smoking Cigarettes Is Good For You

In the early 20th century, before people were aware of the lasting effects of cigarettes, many people, including doctors and children, were partial to a smoke. Although, now we know what cigarettes can do to your health, looking back over past adverts for them can be quite alarming. Multiple companies, such as Asthma Cigarettes, Pall Mall and Big Tobacco, made impressive claims about their products. For example, they said that their cigarettes were good for your health and would reduce the chance of bronchial infections, and some doctors even endorsed these products. Though this may have reflected the beliefs at the time, when science brought to light the health detriments of smoking, the companies quickly outlawed these adverts.

All adverts, no matter what format, should be taken with a pinch of salt – if something seems too good to be true, that's because it probably is. False advertising can be incredibly harmful both to the consumer and, in the long run, the company, though some of the attempts at selling their products are truly unbelievable. However, advertising benefits the business when used well because the customer will trust them and is more likely to return to them. So next time you see an outlandish advert and you get tempted, just think of the free return tickets to America that over 300,000 Brits never got their hands on – you could save yourself plenty of hassle!